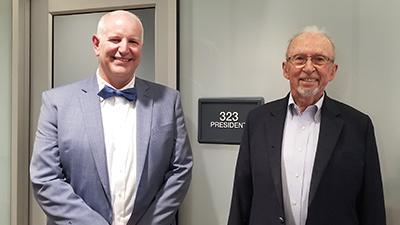 Founding President of Cerro Coso Community College, Dr. Richard Jones, returned to the Ridgecrest campus on Monday, September 13, 2021, to tour the facilities for the first time in almost 50 years.

In 1950 Bakersfield College began offering an A.A. degree in Ridgecrest in conjunction with an apprentice program on the Naval Ordnance Test Station (NOTS).  In 1961 those college classes became the Desert Division of Bakersfield Junior College. Dr. Omar Scheidt was the first dean and had the first full-time faculty of three that included now-retired long-time professors Don Rosenberg and Gary Matulef.  In 1966 Dr. Schedit left and Dr. Jones was appointed Dean. He immediately began his work of establishing a new college here in the high desert.

Before coming to Ridgecrest, Dr. Jones was an English and Journalism instructor and served for three years as a counselor at Bakersfield College. He was also the Director of Student Housing for BC for four years. In 1968, the Desert Division became the Desert Campus. Still located at Burroughs High School, only evening classes were held until 1967 when a third relocatable building was secured allowing for the first-day classes to be offered.

In December of 1969 the state approved a new college in the area and Dr. Jones became the founding President of that new college, yet unnamed, that would become Cerro Coso Community College.

He returned to the Ridgecrest campus with his wife Mary Lou and met with Cerro Coso’s 8th President Dr. Sean Hancock. “It was a joy to see how the vision of 50 years ago has grown beyond early expectations but stayed on target with its students’ first orientation and promise to distant communities,” said Dr. Jones.

He left in 1975 to become the President (Superintendent) of Clark College in Vancouver, WA, and in 1981 became Chancellor of the San Bernardino Community College District.

“It was very enlightening to meet with the founding president of Cerro Coso,” said Dr. Hancock. “To hear the stories and struggles of becoming an independent college, sharing the positive impact on the lives of thousands in the communities we now serve. Once a vision, now a reality, it was with great pride that I shared with him our many successes.