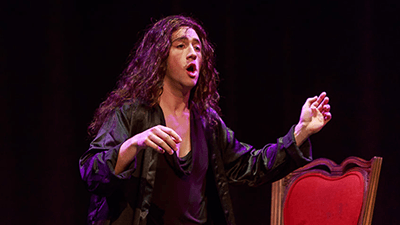 This performance has been rescheduled to a date later this month.

Equally Divine opens our hearts and minds to tolerance, sensitivity to gender fluidity, and celebration of men's and women's empowerment.

The production explores the possibility that the Mona Lisa was inspired not only by the original female model, but also a young man, an apprentice to Leonardo da Vinci. The Mona Lisa was in fact stolen from the Louvre in 1911 and rediscovered in 1913. In this show, the painting comes to life, captive in a dingy Paris apartment. We discover that the painting is of a young man, stolen by another man in love with his "ideal woman"!

Equally Divine moves in time between the 1911-1913 theft and the 1503 creation of the painting, telling a story of love, passion, crime, and genius in words and music.

The performance features a gender-fluid actor, with a music ensemble of cello, piano, and percussion performing music from the time of the Renaissance, works by Stravinsky, Weill, Satie, Poulenc, and composers of today.

Since 1993, the Core Ensemble has toured in every region of the United States and internationally to Australia, England, Russia, Ukraine, and the British Virgin Islands. The Core Ensemble has received support from the National Endowment for the Arts, the State of Florida, Department of State, Division of Cultural Affairs, The Palm Beach County Cultural Council, and the Aaron Copland Fund for Music,

The performance is FREE and open to the public.