Home Core Ensemble to Perform Ain’t I a Woman Virtually

Core Ensemble to Perform Ain’t I a Woman Virtually 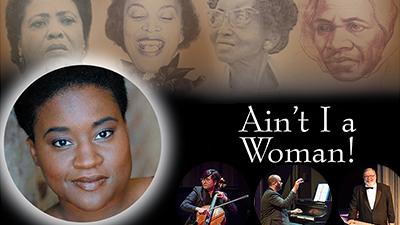 On Tuesday, March 16th the Core Ensemble will perform the chamber music theatre work Ain’t I a Woman! Virtually at 6 p.m.

Shinnerrie Jackson portrays multiple characters while interacting with the onstage musical trio of cello, piano and percussion of Byron Sean.

Ain’t I a Woman! celebrates the life and times of four powerful African American women: renowned novelist and anthropologist Zora Neale Hurston, ex-slave and fiery abolitionist Sojourner Truth, exuberant folk artist Clementine Hunter, and fervent civil rights worker Fannie Lou Hamer. The musical score is drawn from the heartfelt spirituals and blues of the Deep South, the urban vitality of the Jazz Age, and contemporary concert music by African Americans. Ain’t I a Woman! is a joyful exploration of the trials and triumphs of four passionate and accomplished women.

In celebration of Women’s History Month the performance will be held virtually. Participants must register early for the event at www.cerrocoso.edu and will receive an email one hour prior to the performance.