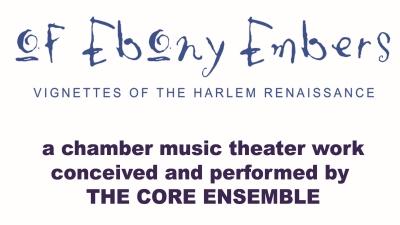 In Celebration of Black History Month, Cerro Coso Community College is hosting a Core Ensemble performance virtually of the chamber music theater work, Of Ebony Embers: Vignettes of the Harlem Renaissance on Tuesday, February 9, 2021, at 6 pm.

Chamber Music Theatre is a unique performance format created by the Core Ensemble, featuring a marriage of theatrical narrative to chamber music performance.

Celebrating the music and poetry of the Harlem Renaissance era in New York City, Of Ebony Embers examines the lives of three outstanding but very different African American poets - Langston Hughes, Countee Cullen and Claude McKay - as seen through the eyes of the great painter and muralist Aaron Douglas.

The script was written by Akin Babatunde and the show is also directed by Mr. Babatunde.

Since 1993, the Core Ensemble has toured nationally to every region of the United States and internationally to England, Russia, the Ukraine, Australia and the British Virgin Islands. The Ensemble was the recipient of the 2000 Eugene McDermott Award for Excellence in the Arts awarded by the Massachusetts Institute of Technology and has received support from the State of Florida Department of Cultural Affairs, New England Foundation for the Arts, Palm Beach County Cultural Council, the Aaron Copland Fund for Music and the Virgil Thomson Foundation.

The event is FREE.  Participants must pre-register to attend at www.cerrocoso.edu.