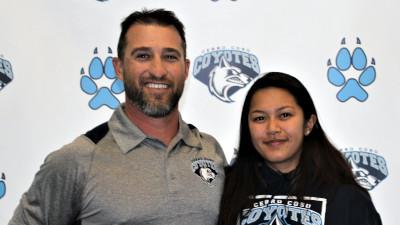 December 9th was a great day for Coyote’s softball player Annika Ramon. Surrounded by coaches, teammates, staff and employees of the college, she signed a letter of intent with William Woods University in Fulton, Missouri to play softball on a scholarship.

A native of Ridgecrest and a Burroughs High School alum, Ramon played three years of varsity softball at Burroughs before joining the Cerro Coso Coyotes in 2017. She will move on to continue her schooling and play for the William Woods University Owls.

“Annika is a versatile athlete that has played both the middle field and the outfield at her junior college,” stated Heat Softball Coach Tracy Gastineau for WWU. “She has good speed on the bases and in the outfield; we look forward to having her join our program and University.”

Ramon was named to the All-Conference Second Team following her freshman season and the Honorable Mention team in 2019. She finished the 2019 season with a .366 batting average and seven extra base hits. She led the team in stolen bases with 25.

“Annika is as strong in the classroom as she was on the field,” said Cerro Coso Athletic Director John McHenry. “Her presence will be missed, but she has set a fine example for her teammates as they prepare for the next year.”

Ramon, the daughter of Durwisa and Jimmy Ramon, intends to major in management information systems.