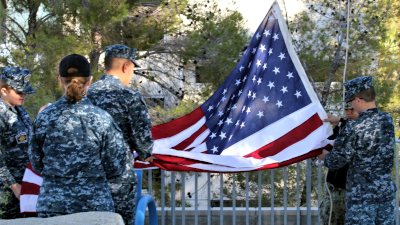 Bill Bloom, Director of Veterans Affairs at the college, delivered welcome remarks, noting the importance of paying tribute to the flag and to the nation, and also honoring those who raised their hands to defend their country.

For student veteran Omar Grajeda, watching the raising of the American flag to commemorate Veterans Day and kick off Veterans Week, stirs memories of his time in service to his country in the Marine Corps.

Grajeda, who was among the speakers at the ceremony, shared the benefits of his service.  “I served 5 years in the Marine Corps, “ he said.  “It not only provided me the opportunity to find a good job here on base, but it gave me the chance to go back and further my education. I want to thank those who support our veterans and active duty military and their families,” he continued naming- Bill Bloom, Director of Admissions and Financial Aid; Jessica Kawelmacher, Admissions and Records Technician;  Alfonzo Guzman, Education Advisor; and Veterans Club Advisor Jarrod Bowen.

Other activities planned throughout the week included a Veterans Resource Workshop, Wall of Courage on display in the college student center, and a Veterans Movie Screening of Lioness.