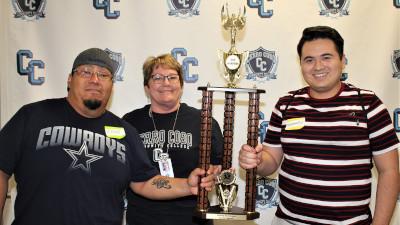 Super Smash Bros. has evolved into an enduring fan favorite—one that has managed the neat trick of appealing to both the casual and hardcore fans—and proved the perfect game for the Cerro Coso Community College Foundation’s first ever Gaming Tournament held on Saturday, August 24, 2019. More than 83 players showed up to play in one or more of the individuals, doubles, or corporate competitions.

The competition was fierce, with players of all ages who play in regular tournaments with esports professionals and with friends daily. Competitive as everyone was, it was all in good sportsmanship, which is important. As the remaining players dwindled, everyone gathered around to watch those who would come out on top.

Today’s top Smash Bros. players can perform feats that would seem impossible to mere mortals. In the end, after an entire day of battles it would be Enrique Garcia and Kevin Brackens who would take first place and runner up respectively in the individuals’ competition. Team Slam ‘n Blam, Justin Graham and Orlando Mielke, took first place for the doubles competition, and Ridgecrest Regional Hospital’s team of Armando Contreras and Eddie Conde won the prize trophy in the sponsorship competition.

Following the success of the first Gaming Tournament, the CCCC Foundation promises to hold another tournament in the spring. Moving on to their next event is the Star Party and Astronomical Barbecue set for September 27, 2019, at the Ridgecrest Campus.