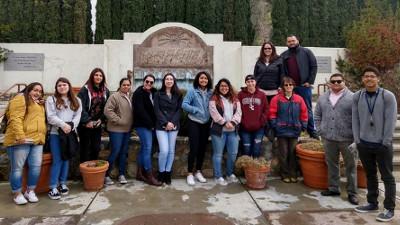 Since 2014, César Chávez Day (March 31) is a U.S. federal commemorative holiday, and a state holiday in California. The International Club of Cerro Coso along with the Latinos Unidos and the Veterans clubs visited the César E. Chávez National Monument (U.S. National Park Service) on Friday, March 8, 2019. The group had a guided private tour which included: the Visitor Center (photos and exhibits), the Chavez Foundation, the Financial Management building for the United Farm Workers during the 1970s, the UFW (United Farm Workers of America) Administrative Building, the Chávez Memorial Garden, and the Desert Garden all within La Paz.

The group learned not only about the life and contributions of César Chávez and the history of the Farm Workers Movement in California, but also about other prominent activists of the era such as Dolores Huerta, Gilbert Padillo, and Larry Itliong.

The group also toured the Tehachapi Railroad Museum. It was a great visit, with snow included, which was a feast for the eyes of many of our students.