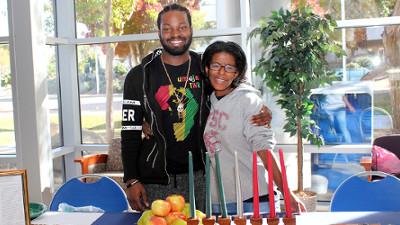 Mostly celebrated in the United States, Kwanzaa is a seven day festival that celebrates African and African American culture and history and takes place from December 26th to January 1.

Umoja students at Cerro Coso held a festival in the entry of Learning Resource Center on Tuesday, November 27 at the Ridgecrest campus to share the customs and meanings of Kwanzaa. There was face decorating, food, and information on the Kwanzaa festival created by Dr. Maulana Karenga in 1966.

Dr. Karenga wanted a way to bring African Americans together and remember their black culture. During Kwanzaa a special candle holder called a kinara is used. A kinara holds seven candles, three red ones on the left, three green ones on the right, with a black candle in the center. Each night during Kwanzaa a candle is lit. The center candle is lit first and then it alternates between the red and green candles starting with the ones on the outside and moving inwards. The seven days and candles in Kwanzaa represent the seven principles of Kwanzaa: Umoja:Unity, Kujichagulia: Self Determination; Ujima:Collective work and responsibility; Ujamaa:Cooperative economics; Nia:Purpose; Kuumba:Creativity, and Imani:Faith. A nation’s culture resides in the hearts and in the soul of its people.