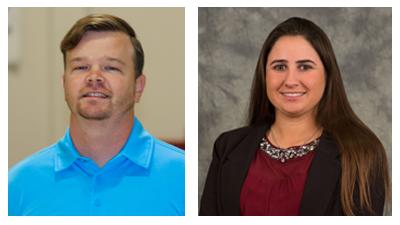 Cerro Coso announced the addition of two new head coaches to lead the women's softball and men's basketball programs during the 2018-2019 school year.

Devin Bennett has been hired to lead the Coyote Softball Program. She comes to Cerro Coso by way of Southwestern College in the San Diego area where she served as assistant coach to Yasmin Mossadeghi since the summer of 2015. As a member of the Jaguar coaching staff, she helped to lead the team to records of 24-17 (2016), 27-12 (2017), 24-15 (2018).

During each of these seasons, her team made the post season including a first ever hosting bid in 2017. Her involvement with the team’s success didn’t end there as she also played a role in supporting 3 first team All-PCAC players, 4 second team All-PCAC players, 2 first team All-SoCal players, and transferred 11 student athletes on to 4-year universities. Other notable stops along Coach Bennett’s journey include coaching stints at William Penn University, Cal State San Bernardino, Victor Valley College, and College of the Desert.

Athletic Director, John McHenry believes that he has found a strong coach to continue moving the softball program forward, “Cerro Coso Community College is very pleased to have Coach Bennett take the reins of Coyote Softball as she brings a vast scope of experience to the athletic department. She is no doubt a great addition to the program, the college, and the community of Ridgecrest”.

Although Coach Bennett spent the majority of her childhood in Overland Park, Kansas, her roots aren’t far from Ridgecrest as she was born in Visalia, CA, where her family still resides. Softball has always been a part of her life as she first began her love of the sport from the age of 4 years old, leading her down a path that would take her on to play at Iowa Lakes Community College and eventually William Penn University as a member of the 2009 conference championship team.

It has been a relevant journey that has lead Devin Bennett to land at the helm of Lady Coyote Softball, and she feels that it is her past experience that will pay dividends for her future. In Coach Bennett’s words, “I am extremely honored to be named Cerro Coso Colleges new head softball coach. I would like to thank the Athletic Director John McHenry for entrusting the Coyote softball program to me. This opportunity to become part of the Cerro Coso family has been exciting. The school has already demonstrated tremendous support and it is great to be a part of a program that truly wants to become successful. I would like to express my appreciation for the many mentors, family, and close friends for all their support and knowledge they have bestowed on me during this journey to become a head coach.”

Chris Dugan will take the lead with the Men’s Basketball Program as it enters its third year since reinstatement. Dugan come to Cerro Coso by way of College of the Sequoias (COS), a member program of the Central Valley Conference and a perennial strength in the California Community College basketball scene.

During his tenure at COS, Coach Dugan served as the lead assistant to Head Coach Rusty Smith and a team that finished third in the CVC last season making a strong post season run. Coach Dugan has worked in his current role since 2013 and has been charged with recruiting, planning and operations, and on the court coaching duties. Prior to his stint with COS, Coach Dugan worked with San Jose State Men’s Basketball as an Operations Coordinator assisting the coaching staff with player development, stat analysis, and film exchange.

His knowledge and prior experience at both the four-year and community college level will serve as an asset to the Coyote Athletic Department and he will become a valued mentor to the student-athletes on campus.

In his own words, Coach Dugan says, “I am extremely excited about leading these student athletes as Head Basketball Coach at Cerro Coso Community College. I would like to thank the college for trusting in me to make a positive impact on the program and build on its strengths. I have a sincere, unbridled enthusiasm to help student-athletes be successful on and off the court.”

"The College is ready to welcome and embrace both Coaches Dugan and Bennett into the Coyote Athletic family.  They bring a breadth and depth of knowledge regarding coaching at the community college level, and Dugan’s understanding of the Central Valley Conference will be a great asset. These attributes will make for smooth sailing as they take the reins of the Men's Basketball and Women’s Softball Programs at Cerro Coso Community College,” stated Jill Board President.