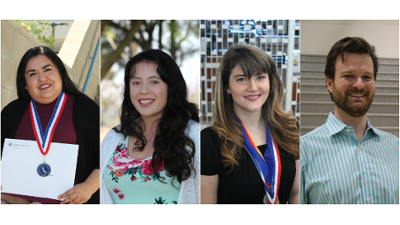 One can belt out an operatic aria and play a violin, another has been known to put out wildfires as a firefighter for the US Forest Service and served as a volunteer for AmeriCorps. A third is a single mother and attended classes online, and the fourth attended classes at the College’s Bishop Campus.

All four of these Cerro Coso Community College students have been named to the 2018 Phi Theta Kappa All-California Academic Team and have been nominated for the All-USA Academic Team.

Cerro Coso students Britney Brown, Caitlin Peterson, Mariela Germann, and Greg Kutzback made first team and are among the 83 college students chosen for this year’s awards that represent some of the best of the two million students enrolled in California’s 114 community colleges.

A math major at Cerro Coso, Britney Brown will graduate with AS Degrees in Mathematics, Computer Science, and Engineering, and three AA Degrees: Lib. Arts: Math/Science, Lib. Arts: Social/Behavioral Science, and Lib. Arts: Arts/Humanities.  She was the recipient of the Coco-Cola Leaders of Promise scholarship at the young age of 16 for her outstanding academic performance and has won her many, many awards.  Brown is both a mathematician and musician, and enjoys playing the violin, singing opera, and dance. She plans to transfer to UCLA next fall.

A non-traditional student, Caitlin Peterson will graduate from Cerro Coso this May with an AS is General Sciences: Biology, Chemistry, and Physical Science, and AA in Lib. Arts: Math/Science. Still unsure of her career goal, she does know that she will pursue a career in a science related field or hydrology with an emphases on sustainability and ecology. She was named the 2016-2017 Student of the Year for the Sciences Department and tutored Anatomy, Physiology, and Biology at the college.

A single mother who works full time, Mariela Germann is also a full-time online student at Cerro Coso and is the recipient of the President’s Outstanding Academic Achievement Award.  She hopes to become a Community College Instructor and would like teach in the areas of Spanish, Computer Literacy, Introduction to Programming, and English. Germann plans to transfer to a four year university in the fall of 2019.

All four students are members of the college Honors Program and the Beta Kappa Chi Chapter of the Phi Theta Kappa Honor Society.

“I congratulate and pay tribute to all of these students for having earned and received this distinguished award. Their achievements as Cerro Coso students is just the beginning, and I have no doubt that the determination and dedication they possess will drive them to excel in all of their future endeavors,” stated Cerro Coso President Jill Board.