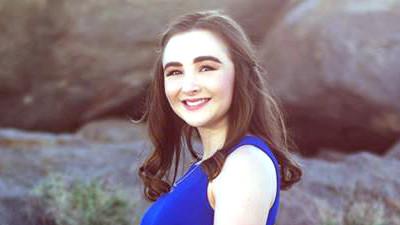 Kelsey Hire is currently the Vice President of the Student Government of Cerro Coso and a Political Science major at the college.

She has been an active member of the SGCC for 2 years since Fall 2016. She has served as a senator, moved up to be the Region IX Representative, and was elected as the SGCC Vice President and President of the Senate for the 2017-2018 school year. “Now that's commitment, go Kels'!”

Kelsey says she enjoys “the camaraderie among the E-Board and Senate the most. It makes planning and hosting activities so much more fun. Everyone is friends with each other, so it feels like one big family. We have each other's backs no matter what. I'm going to miss it when I leave!"

Kelsey’s future plans include transferring to a UC campus, she has applied to 4 UC’s and is patiently (and anxiously) waiting to hear back. Her #1 choice is to attend UCLA to earn her bachelor's degree in Political Science. After that, she wants to attend law school and become a public law attorney or prosecutor.

Having lived in Portland, Oregon her entire life, Kelsey moved to Ridgecrest her senior year of high school.