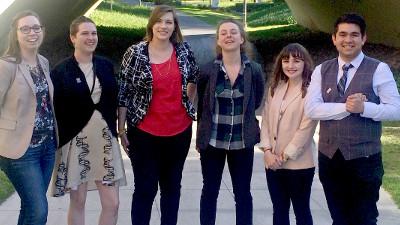 On Saturday, April 1, Cerro Coso Community College was strongly represented at the Annual HTCC Student Research Conference held at the University of California, Irvine. This multidisciplinary conference, sponsored by UCI and the Honors Transfer Council of California, showcases outstanding faculty-mentored research by students from California community colleges, with a focus on honors students.

Honors Program student Carol Blair’s paper on Magical Realism: A Protest against the Lingering Effects of Colonialism discussed Gabriel García Márquez's use of magical realism in his book One Hundred Years of Solitude as a technique to protest the processes of colonialism. It also highlights his commentary on the social, economic, political, and intellectual exploitation that Latin America experienced at the hands of subjugating powers. Blair was mentored by Dr. Christine Swiridoff.

Mentored by Professor Matt Jones, Kelsey Hire’s presentation on The Politics of Powerlessness: Machine Politics' Most Powerful Urban Strategy Taken Nationally by President-elect Donald Trump examines the model of urban machine politics, the politics of powerlessness, and how Donald Trump translated this model to the national political arena. Kelsey will graduate from the college this May and spend her summer as an intern for Congressman Kevin McCarthy.

Stephanie Mendoza’s research The Future of Genetic Engineering: A CRISPR Method to Genome Editing was mentored by Dr. Claudia Sellers and Dr. Guck Ooi. Her work reviewed the revolutionary gene-editing method called CRISPR that can alter your genes to cure diseases that were thought to be incurable.

Alejandro Tellez-Cruz presentation Absurdist in Chains: an Exploration of Absurdism in the World of Camus compared different case studies within the literary canon of Albert Camus connecting Absurdism to Free Will theories through its effects on the human condition. Tellez-Cruz was also mentored by Dr. Swiridoff.

Mentored by English Professor Cliff Davis, Kayla Voigt’s work Milton's Characterization of Eve: Preconditioned for Weakness centered on how John Milton preconditions Eve to fall from grace by prefiguring struggles with narcissism, guilt, and the inability to resist Satan in his book Paradise Lost.

Presenting their work at the HTCC Student Research Conference makes these Cerro Coso students eligible not only for monetary awards but also to submit their work for publication in the HTCC anthology Building Bridges, published through the University of California, Irvine.