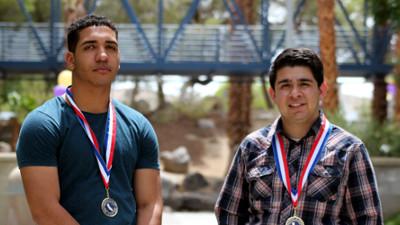 Teams are selected based on the scores nominees receive from Phi Theta Kappa judges.

Valdez and Cruz both made first team and are among the 85 California students chosen for this year’s awards that represent some of the best of the two million students enrolled in California’s 113 community colleges.

Valdez, a Political Science major was nominated for the award by Dr. Christine Swiridoff. He will be attending UC Berkeley next fall majoring in Law. Ultimately his goal is to promote economic growth in less developed countries through marketization and industrial growth.

Cruz is a Liberal Arts and English major at the college and was nominated by Professor Lucila Gonzalez-Cirre. He hasn’t made up his mind on whether to transfer to UC Berkeley or UCLA this fall, but knows he wants to work with their English Department with hopes of finding opportunities to publish his writings.

Both Valdez and Cruz attended the Ridgecrest campus, will graduate from Cerro Coso this May, have been active in the Student Government of Cerro Coso, and are members of the college Honors Program and the Beta Kappa Chi Chapter of the Phi Theta Kappa Honor Society.

“I congratulate and pay tribute to both of these young men for having earned and received this distinguished award,” stated Cerro Coso President Jill Board.