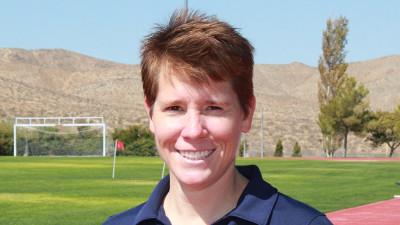 An outdoor enthusiast who loves athletic competition, Stender participates in ultra-marathons and rugby, both intense sports that require determination, strength, speed, and drive. She played rugby at San Jose State University, USA 7s Rugby, and National All-Star Competition Rugby under Head Coach Richie Walker who led the Women’s Eagles Sevens program through the Rio 2016 Olympic Summer Games. Rugby is a fast-paced, hard-hitting, hard to explain game with no rules, but laws, that is played out in 80 minutes with no timeouts and only a 5-minute half time. Now that’s extreme!

Prior to relocating to Ridgecrest Stender worked as an Athletic Trainer at a physical therapy clinic in Las Vegas. In addition to extreme sports she enjoys backpacking even during the winter months and tells the story of search and rescue being sent out to find her and fellow backpackers when they failed to return on a day hike in a deep canyon. The group had to push the snow up on a ledge to keep them from falling off over night. “There were a lot of jumping jacks and push-ups being done that night to help us stay warm,” she laughed. Rescuers waited for them less than a mile from the end.