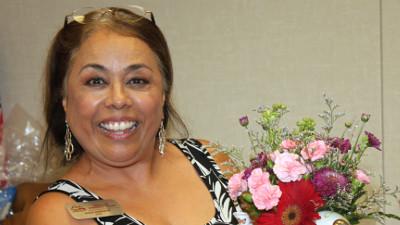 Magi Mauldin, AKA the Filipino Princess and curriculum specialist at Cerro Coso, retired at the end of June.

Magi started working at the college in 1996 as a full-time temporary employee in the Office of Instruction. She was hired permanently in February of 1997 as the Receptionist at the front desk working for the Public Information Office, a position she says is a great place to learn who everyone is and where they are located. Holding a number of positions over the years including: Receptionist, Executive Secretary, and Administrative Secretary, Magi has served as an Instruction Office Specialist since 2004. She also taught as an adjunct instructor at the college for over 10 years and is known as the go to person for any and all questions on Outlook.

Things were different when Magi first hired on at Cerro Coso. In those days all full-time and part-time faculty hiring was handled through the Instruction Office. She has had the pleasure of serving 16 bosses in her 19 years. Sadly 5 of those have passed on.

Magi provided critical support services to the students, faculty, and administration. Her invaluable knowledge of curriculum, course codes, faculty load, scheduling, state requirements, and so much more have earned her the title of “Classified of the Year” three times by the faculty. Her upbeat and friendly attitude will be missed along with her “cha cha cha” at the end of every birthday song sung.

Originally from Sierra Sands, Magi was called to assist in the Office of Instruction at a critical time. She didn’t immediately return the call because she was serving as a back-up actress in a Johnny Depp movie The Brave that was being filmed in Randsburg. She played a Native American girl on the bus and danced around the fire at night—the one and only movie she has ever been in.

Now retired, Magi plans to sell her house in Ridgecrest, move to her condo in southern California, and enjoy spending more time with her family.

Thank you Magi, we wish you well. We will miss your “Cha Cha Cha”!