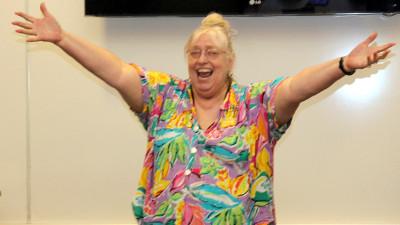 Speech professor Janis Jamison retired after 30 years of service to Cerro Coso. As a drama coach and speech instructor, Jamison has inspired some very talented students to take the stage and did so herself for many years.

A flair for the dramatic, Jamison’s story is one of love, loss, passion, entertainment, and unexpected curves. As a young woman she lost her first husband in the Vietnam War. Not sure what to do in life after her tragic loss, Jamison enrolled in classes at El Camino Community College and discovered her love for acting. She earned both a Bachelor’s and Master’s Degree from California State University, Long Beach, and took to performing on the road. She’s landed a number of acting roles over the years including that of a killer masseuse in the opening scene of the 1976 version of Charlie’s Angels. Jamison also played a masseuse in Dynasty and decided perhaps this was a calling, so she attended the Institute of Pscyho-Structural Balancing, a school of holistic body therapy, and earned an advanced degree in therapeutic massage and bodywork to help pay the bills and fill the gaps between acting jobs. “Acting is a hard business to get into,” said Jamison.

How did this actress end up in Ridgecrest? Well she met her current husband, James Nichols, while touring the Himalayas and he lived in Ridgecrest. Still active in local theater, Jamison started working at the college as a student worker in the chemistry lab. She taught drama for many years as an adjunct instructor and became a permanent part-time instructor in 2003, concluding her career in December teaching speech. She is a two time recipient of the “Outstanding Instructor of the Year” award chosen by Cerro Coso students.

In retirement, Jamison is looking forward to resting up, spending time with her mother, and reconnecting with family, friends, and students from her past. She says she will remember those students and staff whose lives she has touched and who have touched hers. “They are always a part of you, even if those encounters were less than you would have wished,” she said.

Thank you Janis! It is now time for you to look back with pride and satisfaction…And look forward to all the things you’ve yet to enjoy!