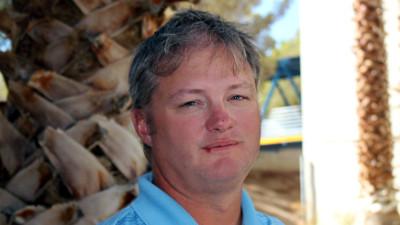 In the game of baseball timing is everything and for Justus Scott the time was right to take over as the new Head Baseball Coach and Interim Athletic Director at Cerro Coso. Scott is the fourth head coach in the Coyotes’ 20 year history. He brings with him a resume that includes a wealth of coaching knowledge and experience, ranging from the professional, collegiate, high school, and summer collegiate league ranks.

Scott was a catcher for the University of Memphis from 1994-1996 and the Will County Indians of the Heartland League during the 1996-1997 season. After his playing career he served as assistant coach for the University of Memphis, Middle Tennessee State University, Jackson State Community College, Lincoln Memorial University, and Murray State University. He also served as the head coach for the Hornell Dodgers of the New York Collegiate League and for two summers as the head coach of the Florence RedWolves of the Coastal Plain Collegiate League and as a roving instructor for Major League Baseball international. Most recently Coach Scott served as Assistant Head Coach for the Del Oro Golden Eagles. He grew up in New Jersey and New York and has played and coached baseball in Florida, Tennessee, Kentucky, South Carolina, New York, and now California.

“My goal for the Coyote team is to prepare them to be good citizens in the community, good students in the classroom, and improve every day as baseball players,” said Scott. Even though the upcoming season may prove to be tough for the team, the Coyotes are looking strong.

“We are very excited to have Coach Scott leading the Coyotes at Cerro Coso,” said Vice President of Student Services Heather Ostash. “I am confident he will have high expectations for the team and bring great energy and passion to Cerro Coso baseball.”