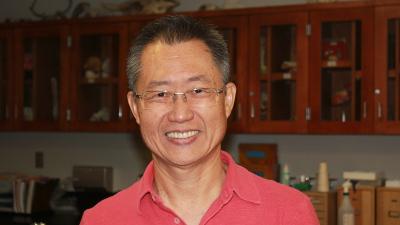 Meet Dr. Guck Ooi, the new Associate Professor of Biology at Cerro Coso. Ooi has been teaching Human Anatomy and Physiology classes at the college since 2011 as an adjunct faculty member.

Born in Malaysia, Ooi was educated in Australia and has always been interested in science. He spent 10 years as a Research Scientist studying growth and development, and diabetes for the U.S. Government at the National Institutes of Health in Bethesda, Maryland. It was there that Ooi met his wife Yoko Murata from Brazil who was working on her Ph.D. at the time. After marrying, the two returned to Australia with their young daughter, where they both worked for six years at the Prince Henry’s Institute of Medical Research. Friends whom they met in Maryland suggested that they submit a grant together to study molecular markers of infectious diseases, and they were pleasantly surprised when the Department of Defense approved their grant for both phase I and phase II work. Ooi and his family then moved to Ridgecrest in 2004 to help start a biotech company and to work on projects on antibiotics discovery, malaria, and tuberculosis.

Ooi has been teaching on and off in classrooms, labs, and workshops for many years, sharing his expertise and passion for science. “Science applies to everything around us and it is important that students learn to critically evaluate what they read,” he said.

Ooi holds a Bachelor’s and Master’s Degree in Applied Science from the Royal Melbourne Institute of Technology in Australia, a Ph.D. in Protein Chemistry and Endocrinology from Monash University in Australia, and has published over 60 articles in scientific journals.