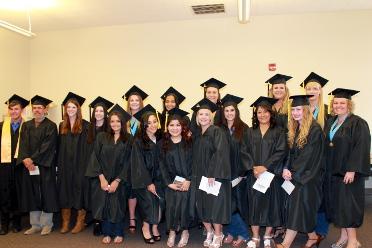 The snowcapped mountains of the Eastern Sierra proved a perfect backdrop as graduating students' and families joined in celebration at Cerro Coso Community College's Eastern Sierra College Center in Mammoth Lakes for Commencement Exercises on Friday, May 9th 2014.

"For some of you this is only the first milestone to reaching your ultimate education goal of a bachelors, masters, or doctorate degree," said Cerro Coso President Jill Board. "For others, it is earning that certificate that gave you the skills, knowledge, and experience that will help you get a job, keep a job, or make more money to secure a better future for you and your family. Either way it took hard work, creativity, determination, and for some maybe even a few tears, but you persevered, you stayed the course, and most importantly you succeeded."

Participating in this year's commencement ceremony were student speakers Shannara Roberts (A.A. Liberal Arts, Social and Behavioral Sciences) and Abigail Don (A.A. Liberal Arts, Mathematics & Sciences). Other highlights of the evening included an address by Mammoth Lakes Foundation's Marketing Director Juliana Olinka, Randall Thompson with text by Robert Frost: "Choose Something Like a Star" performed by the Eastern Sierra Chamber Choir, and an Alumni Address by Rose Martin. The processional and recessional were performed by Mr. Richard Hihn.

"An amazing world filled with changes that we can't even begin to imagine awaits you," said Board. "You have an opportunity and a responsibility, to shape the world of today and tomorrow."